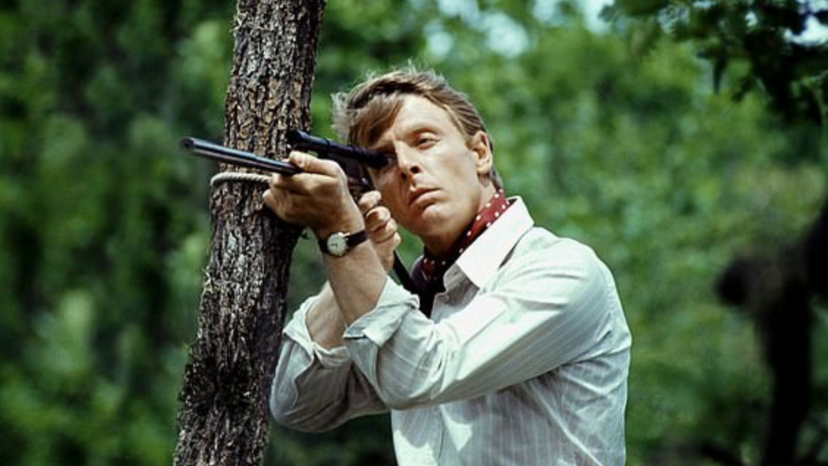 This week is a Suits on Film Lockdown Playlist special. Submitted by menswear writer, Bruce Boyer – a regular Cad customer and friend – this is a focus piece he wrote a while ago on the actor Edward Fox. Often cited as an authority on men’s fashion, Bruce was formerly fashion editor at both GQ and Esquire. With a focus on four of Fox’s films that demonstrate stand out sartorial strength, read on for some in depth observations.

Never mind that he has an OBE and a Best Supporting Actor award, or that he is a member of an incredibly talented stage family – his brother James and nephew Laurence are renowned actors, as is his own son Freddie, his father Robin was a well-known theatrical agent, and his maternal grandfather Frederick Lonsdale a prolific dramatist. And never mind that he was a lieutenant in the Coldstream Guards or has starred with such talented screen beauties as Elizabeth Taylor, Vanessa Redgrave, Sarah Miles, Claire Danes, Uma Thurman, Julie Christie, and, well there’s no need to go on, is there?

Edward Fox is the consummate actor, most famed for playing suave Upper Class Englishmen, even though he made his film debut in two of the most famous “Angry Young Men” movies of the 1960s, The Loneliness of the Long Distance Runner (1962), and This Sporting Life (1963). He carved out a niche for himself as a more serious version of Ian Carmichael perhaps, or Terry Thomas. And, funnily enough, what all three have in common – apart from being brilliant actors and roguishly handsome – is that they wore clothes with incredible propriety and panache. That they were all slim and had the right carriage and comfortable gestures only added to their ability to wear their clothes with ease and elegance.

In Fox’s case, there are four films to my mind that stand out as ethereal partnerships between costume designer and actor: The Day of the Jackal (1973, the role which brought him to the world’s attention), Edward and Mrs. Simpson (1978, in which he portrayed King Edward VIII), The Shooting Party (1985, starring James Mason), and A Month by the Lake (1996, with the sublime Vanessa Redgrave).

Each film has its sartorial strong points as perfected by Fox. Only one was really a period film, The Shooting Party, the Edwardian country house piece awash with vintage tweed jackets and plus twos, gaiters, deerstalker caps, and covert cloth trousers.It’s just the sort of thing to make a Ralph Lauren salivate into his ancient madder. The color scheme is all soft mossy greens, heathery russet browns, mouse greys, and taupes. Except in the evening of course, when the men are all in black and white dress clothes. Those were the days when a long weekend in the country necessitated two trunks worth of gear. 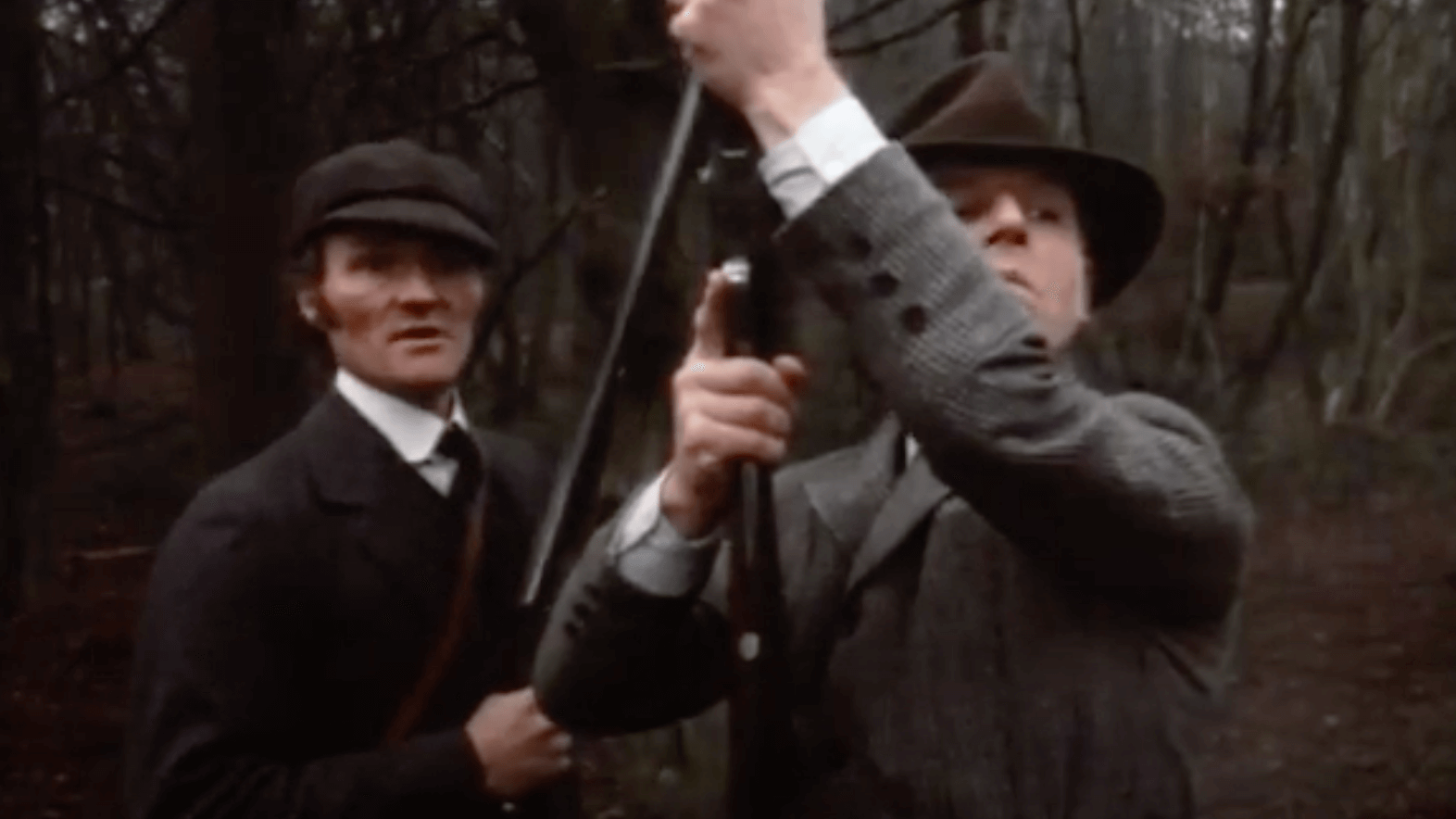 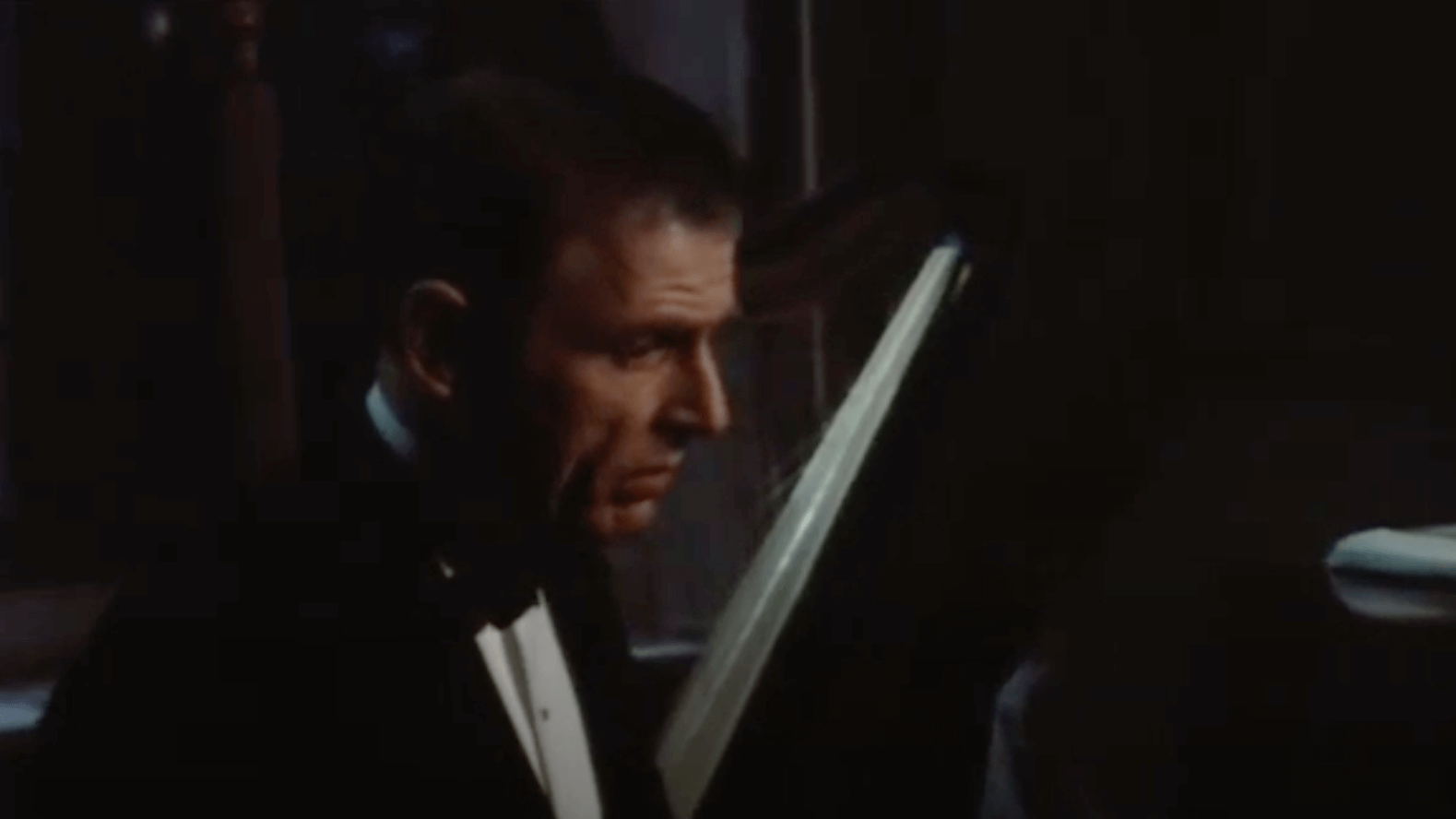 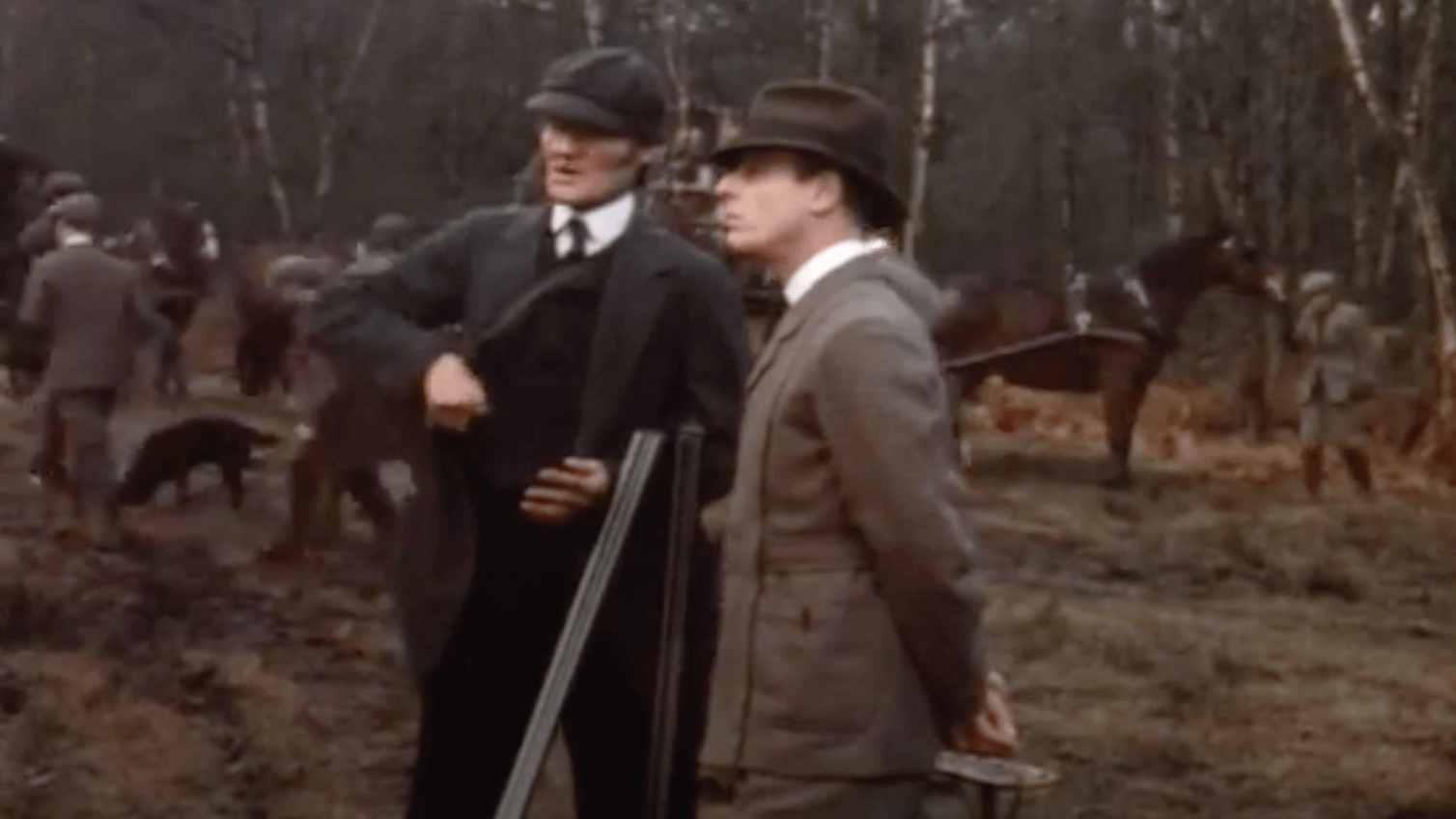 The Day of the Jackal, on the other hand, is a rather spare, simple business. Fox, playing an international cold-blooded killer for hire, is most often seen in a trim pair of cavalry twill trousers and shirt, sometimes a simple sports jacket, and one beautifully cut tan cavalry twill suit. But has ever a man worn an ascot with more panache? Paisley or polka dot, Edward Fox knows how to tie a scarf around the neck. It’s often the only spot of color he allows himself, but that should teach us all a lesson: just one accessory can make all the difference, provide just the appropriate signal of dash and individuality, if you do it right. This idea will come up again in a paragraph or so. 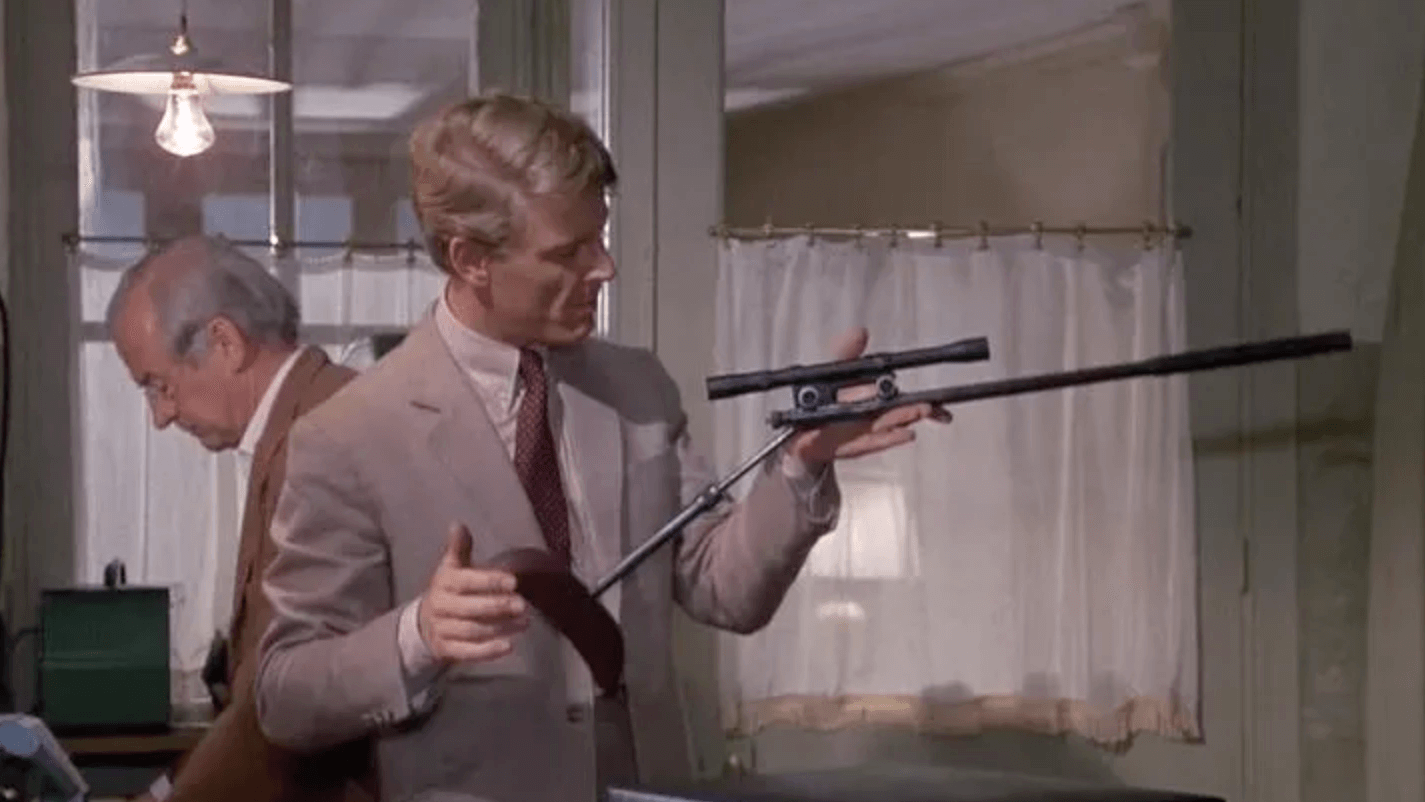 A Month by the Lake is one of my favourite films for a variety of reasons. First, it’s got Vanessa Redgrave at her loveliest and most enchanting. Her costumes, I should add, are wonders of gauzy, billowing pale silk and linen sweaters and skirts; in her maturity she never looked better. Then there’s the setting: Lake Como in the sunny, halcyon days of its idyllic Italian beauty just before the outbreak of World War II. And then there’s the redoubtable Mr. Fox. 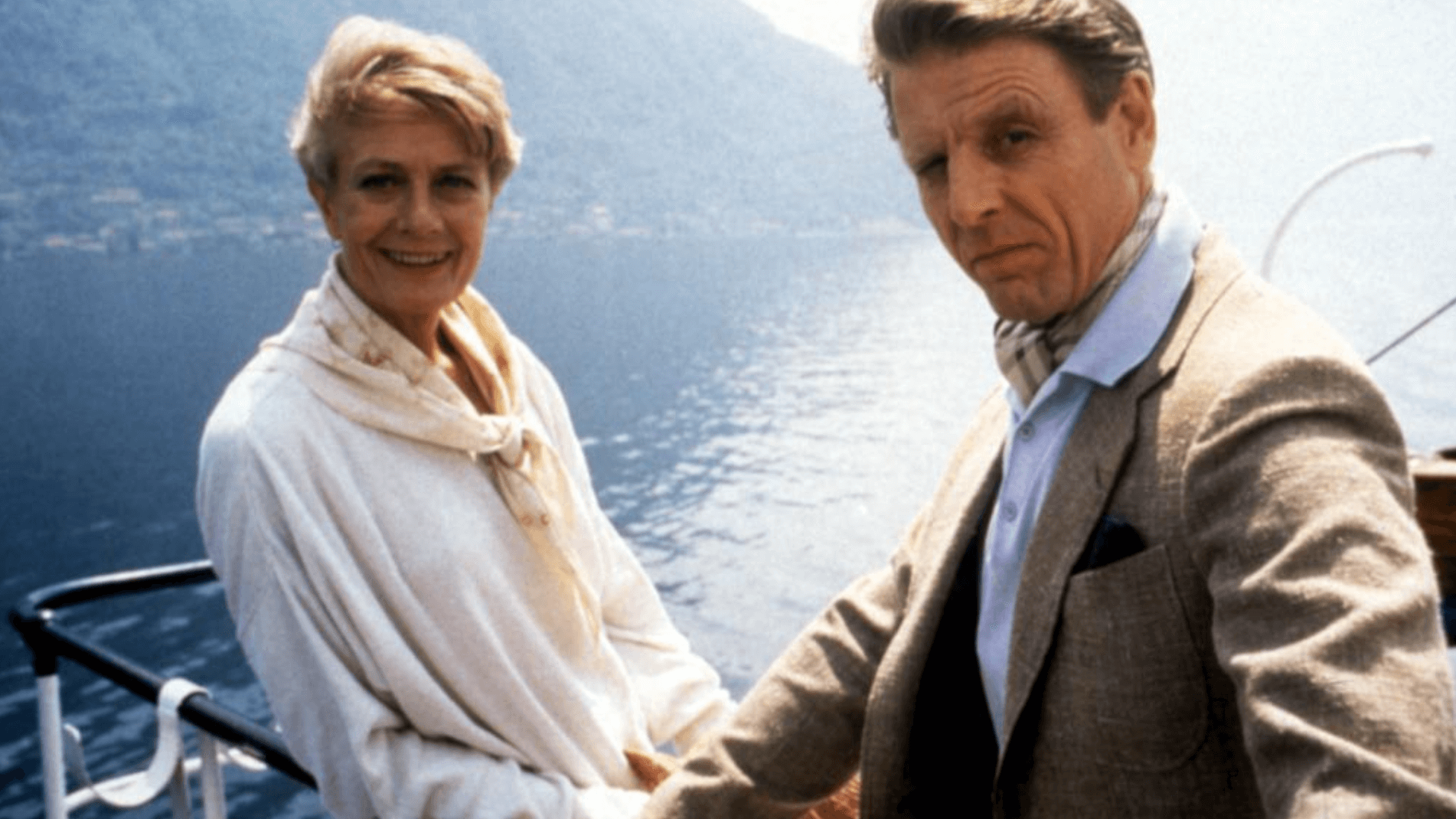 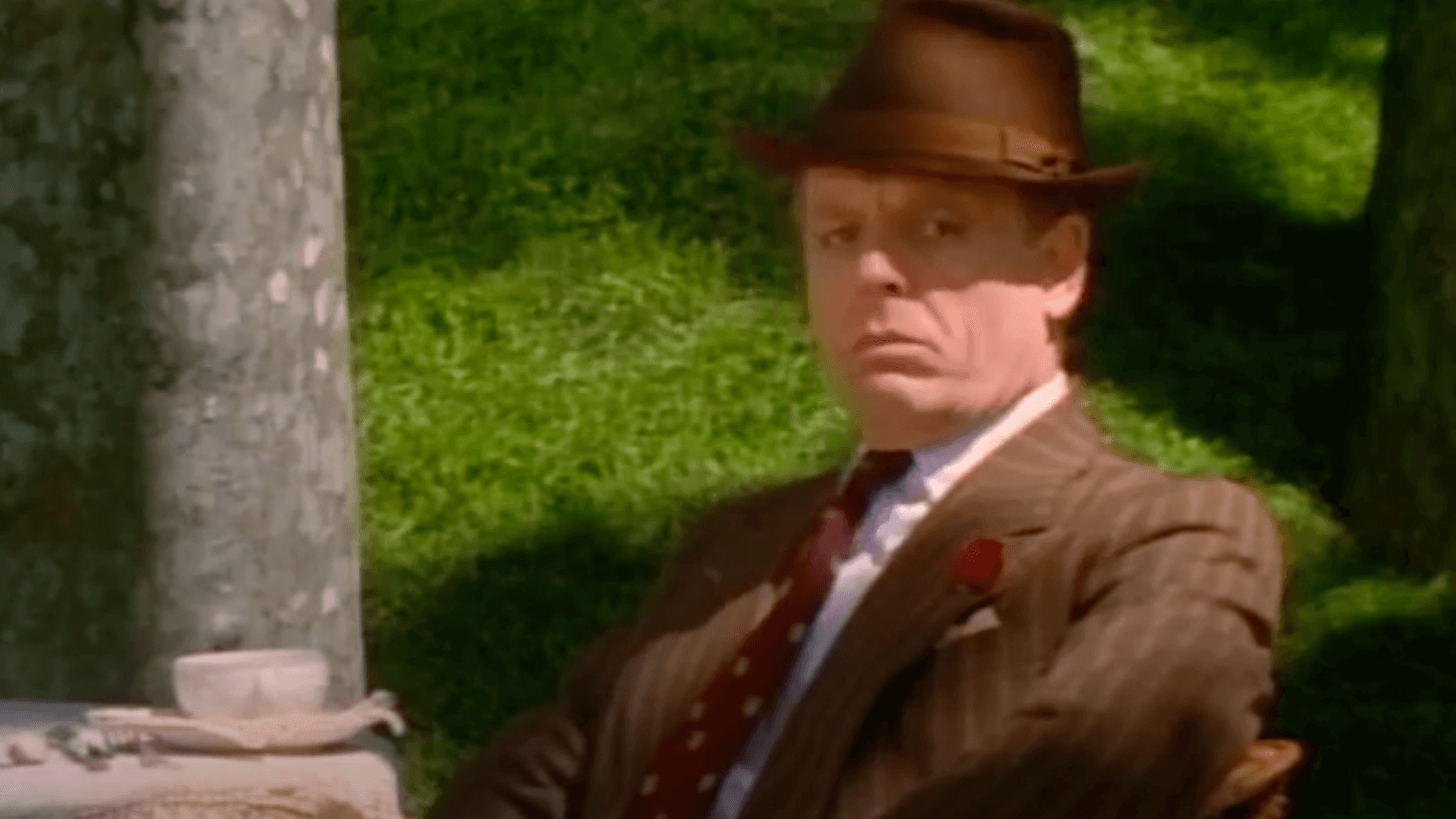 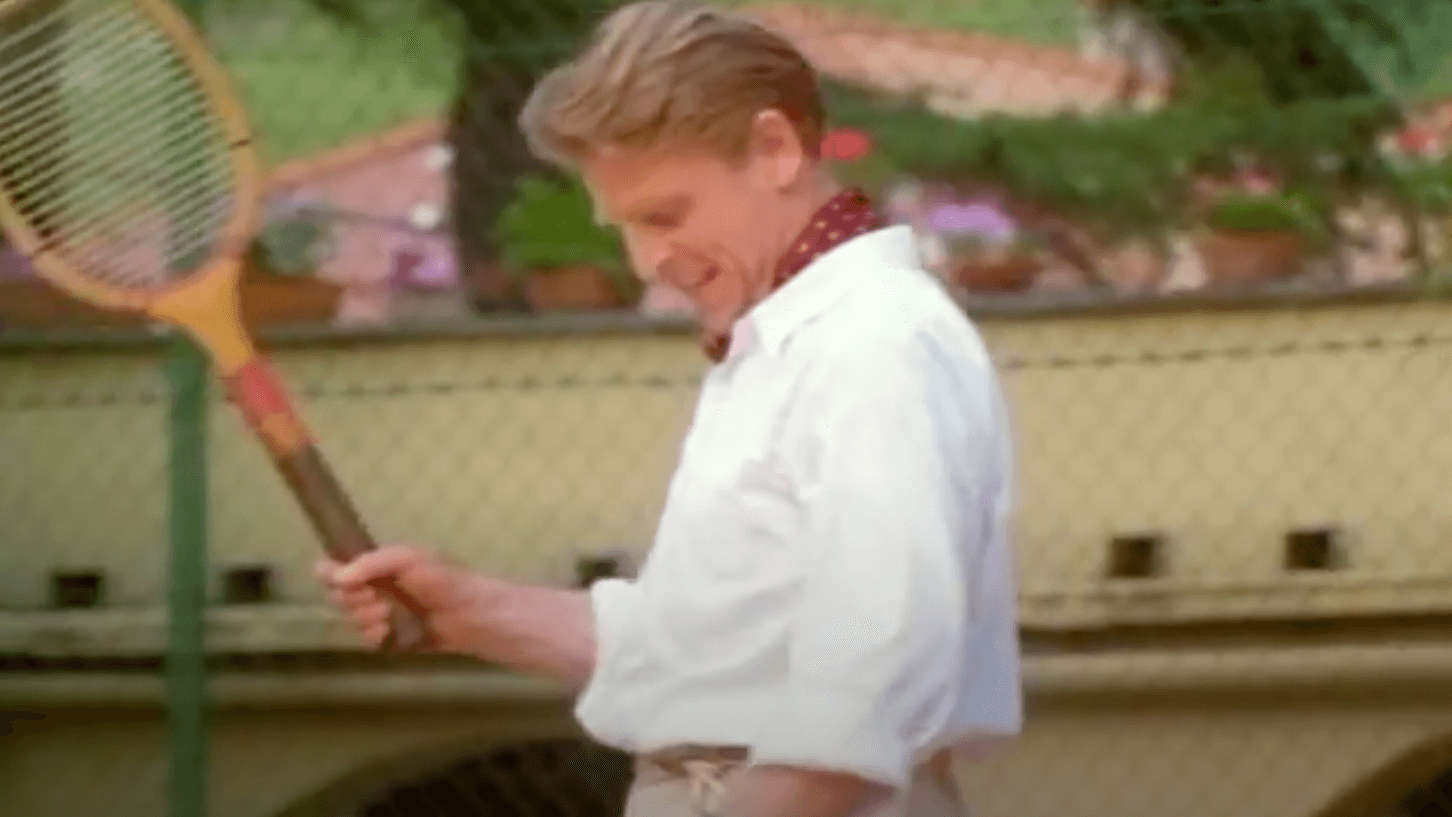 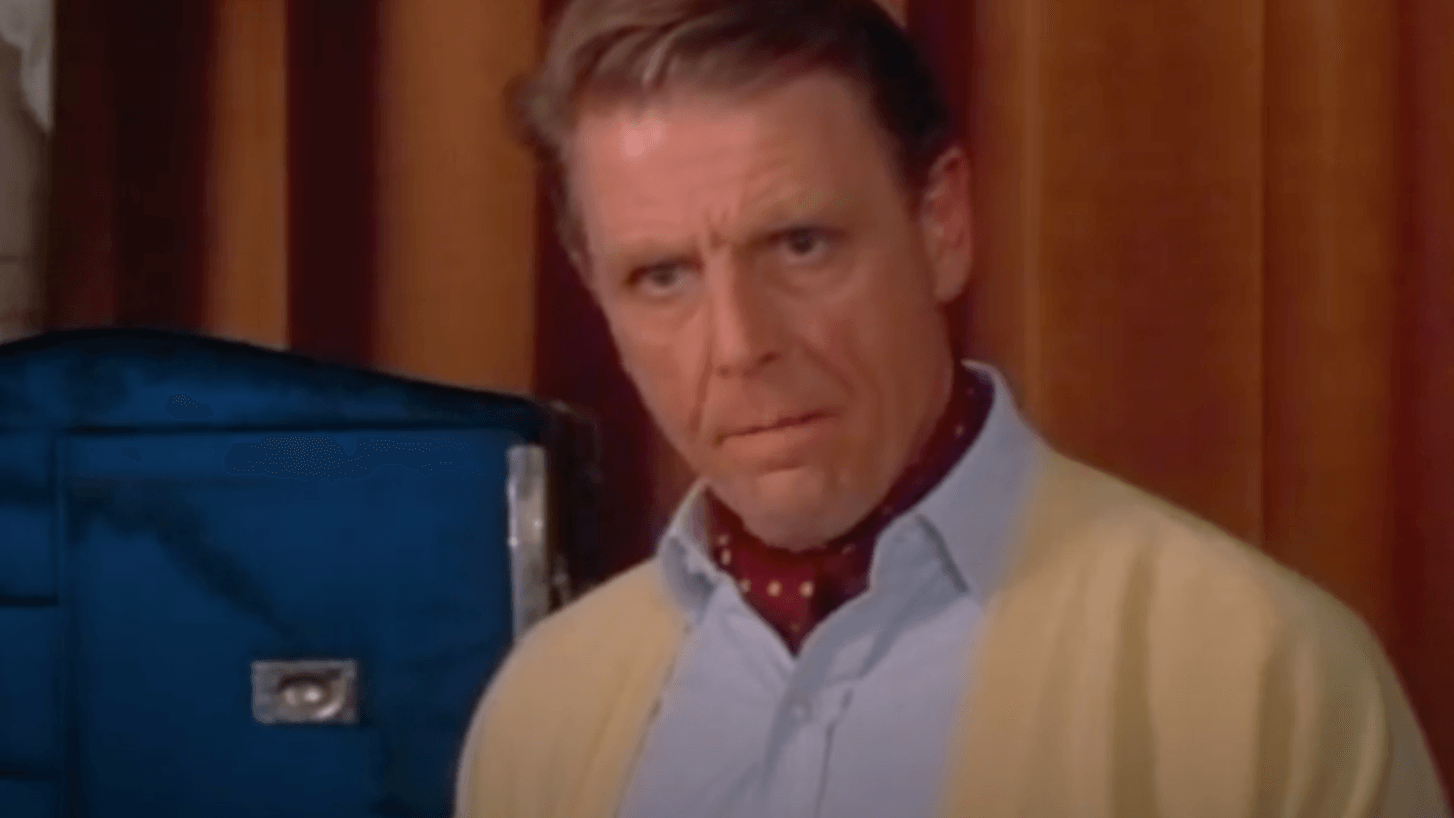 Whether in a simple fresco suit, linen sports jacket, navy blazer or just a pair of handsomely cut trousers and easy cotton shirt, he’s perfection as the English gentleman abroad. His tailored wardrobe is a poem of minimalism and ease, the line and silhouette precise without being too crisp or studied. Cut is everything. And then there’s that ascot again, worn as though it were the most natural thing in the world. And this time he’s added a soft brown fedora, which he continues to fool with and tilt at a rakish angle. A pose for the head and hands, it’s just the right prop for him, dashing and jaunty almost in a military way (his character is an ex-soldier). Is it a bit pompous? Perhaps, but forgivably so for being so stylish.

And finally, there’s the Thames Television series Edward and Mrs. Simpson (1978), a masterpiece of modern classic dress about the man who invented it all, the Duke of Windsor. The screen wardrobe – unhistorically correct only in several very minor, technical, and unimportant ways – comprises more than two dozen tailored garments – highly tailored suits and sports jackets, overcoats, and evening dress — and their accompanying accoutrement, as well as several casual outfits consistent with photos we’ve seen of the then uncrowned King during this period. 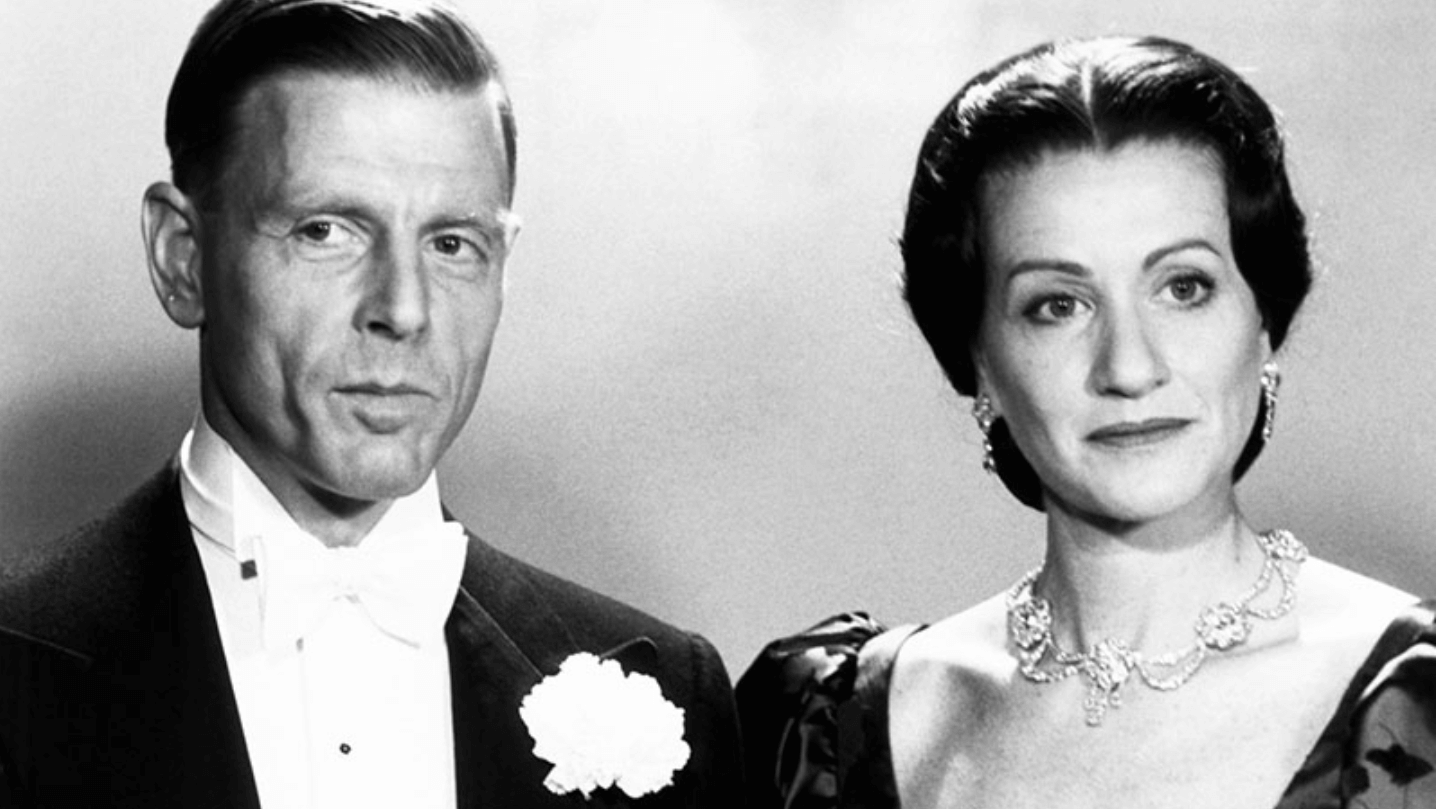 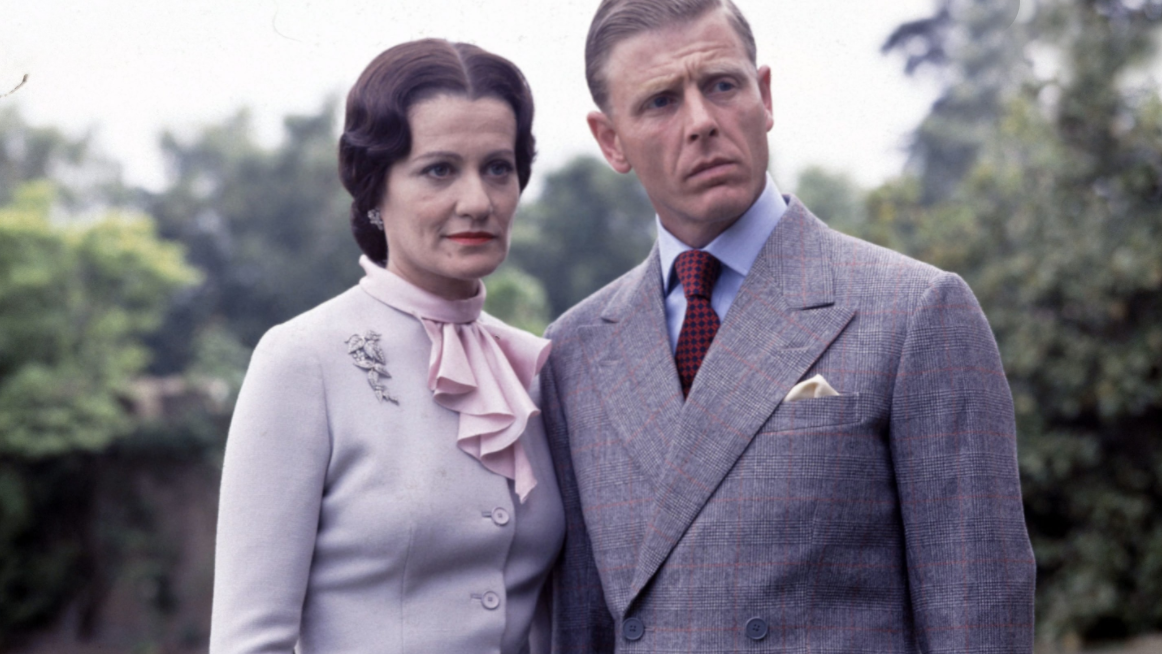 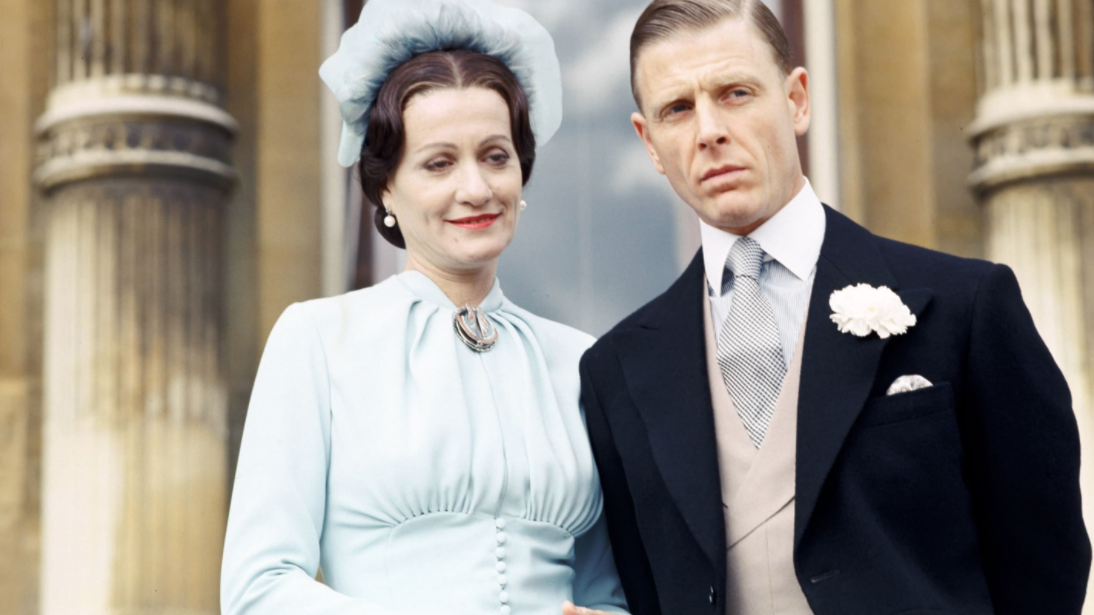 The focus is on fitted double-breasteds, stripes in fine flannels and worsteds, worn with brightly checked silk neckwear, spread collared shirts, and suede shoes; with the odd twill or tweed sports coat thrown in for weekends at The Fort or walks along the beach. He’s usually seen in town suits, but there’s one scene of him wearing a wonderful twill jacket with checked shirt and tie, and another wearing an intrepid trench coat with a plaid scarf around his neck. Pristinely cut dinner jackets for the evening scenes of course.

Fox’s version of Windsor remains the truest in what has become something of a genre of its own. Undoubtedly it’s because he took the trouble to understand the man and the history, but perhaps also because there’s an affinity here. The physique is about the same in both men, both have that fair-haired quality about them. And then there’s the understanding that clothes should be worn fastidiously, but not too studied. All in all, a most spirited sartorial excursion.

A return to our usual format next Friday, with your submissions via #cadsuitsonfilm on Instagram.