Now that a sense of normality seems to be returning to daily life what will we wear in public? Particularly at holiday gatherings? Will we want to show up in the pyjamas we’ve been wearing for the past year-and-a-half, or will we want to make these special occasions special? Will “Black Tie or “Formal Dress” continue to be the ultimate evening party look? 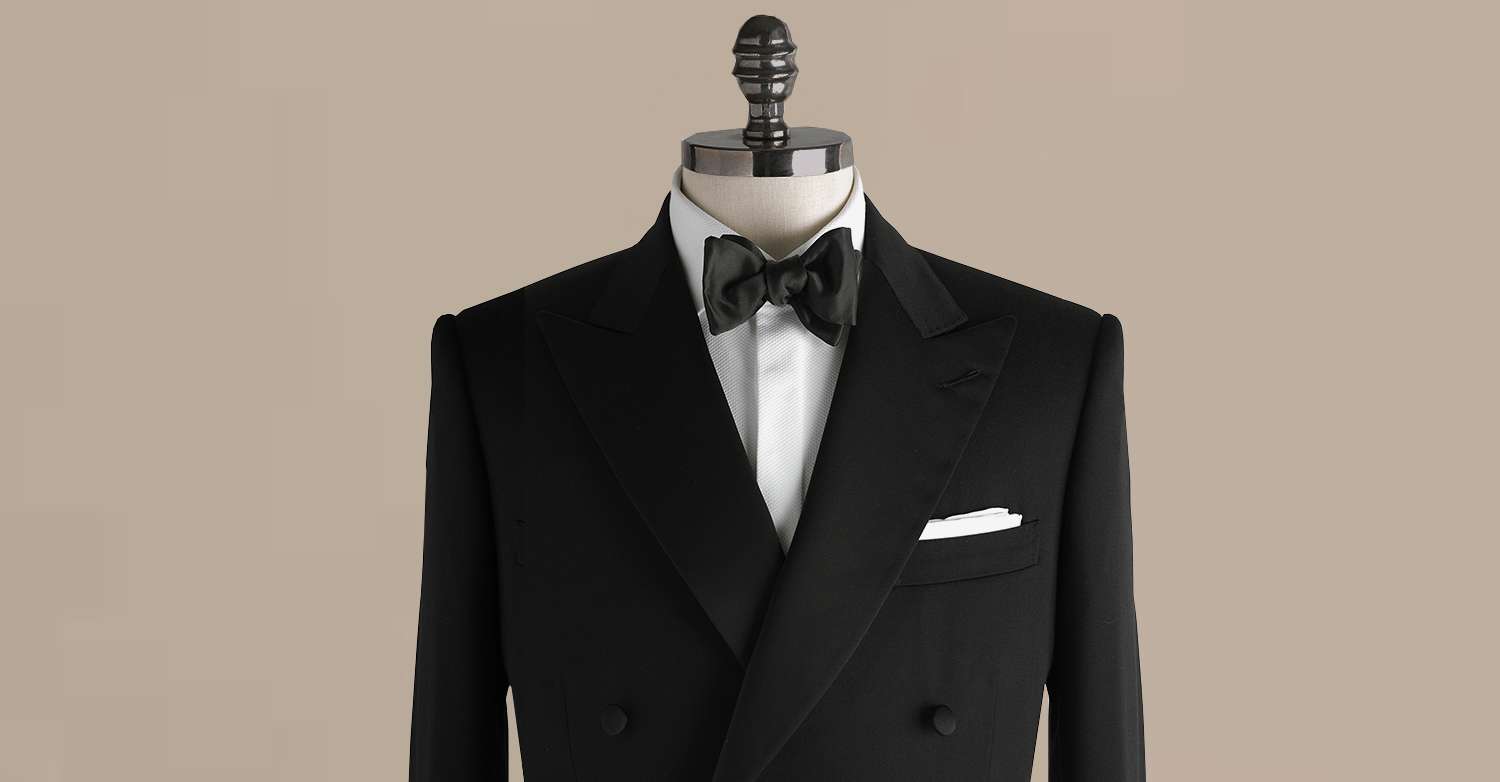 Many are chaffing at the bit to step out in some real finery again. And for men, Black Tie dress – the tuxedo, dinner jacket, or le smoking if you will – is both the easiest and most attractive outfit a man can wear. Its basic form has a stability and simplicity denied to almost every ensemble worn by men in the last two hundred years. But many are completely at sea about formal wear. It’s something of a, what’s the word I’m looking for, ah yes, paradox. It’s easy, but impossible if you don’t know what you’re doing.

The solution is to understand that the simplicity of the tuxedo exists precisely because there are rules of wear. Whilst rules aren’t much in fashion these days, they can often make things easier, and with the tuxedo an understanding of a few simple rules makes dressing for a formal event a breeze. Trust me on this, the tuxedo and its accessories, is a minimalist outfit which functions to make a man more dignified and handsome. Historically the outfit served merely as a foil to the more colorful dress of women, but I’ll leave the political correctness of that discussion for another time.

In the 21st Century prescription, tradition, and propriety may not be often used in daily vocabulary but formal dress shows them to still be useful. And the fact is there’s a growing longing for some order in our lives. Specifically in the past several years there have been numerous experiments with social choices in matters of dress: casual business, retro, alternative formal, creative black tie, dress optional, and proliferating designer “looks”. It’s something of an irony that men who are capable of running huge conglomerates have no idea what to wear on any particular occasion except going to bed. Don’t get me started. 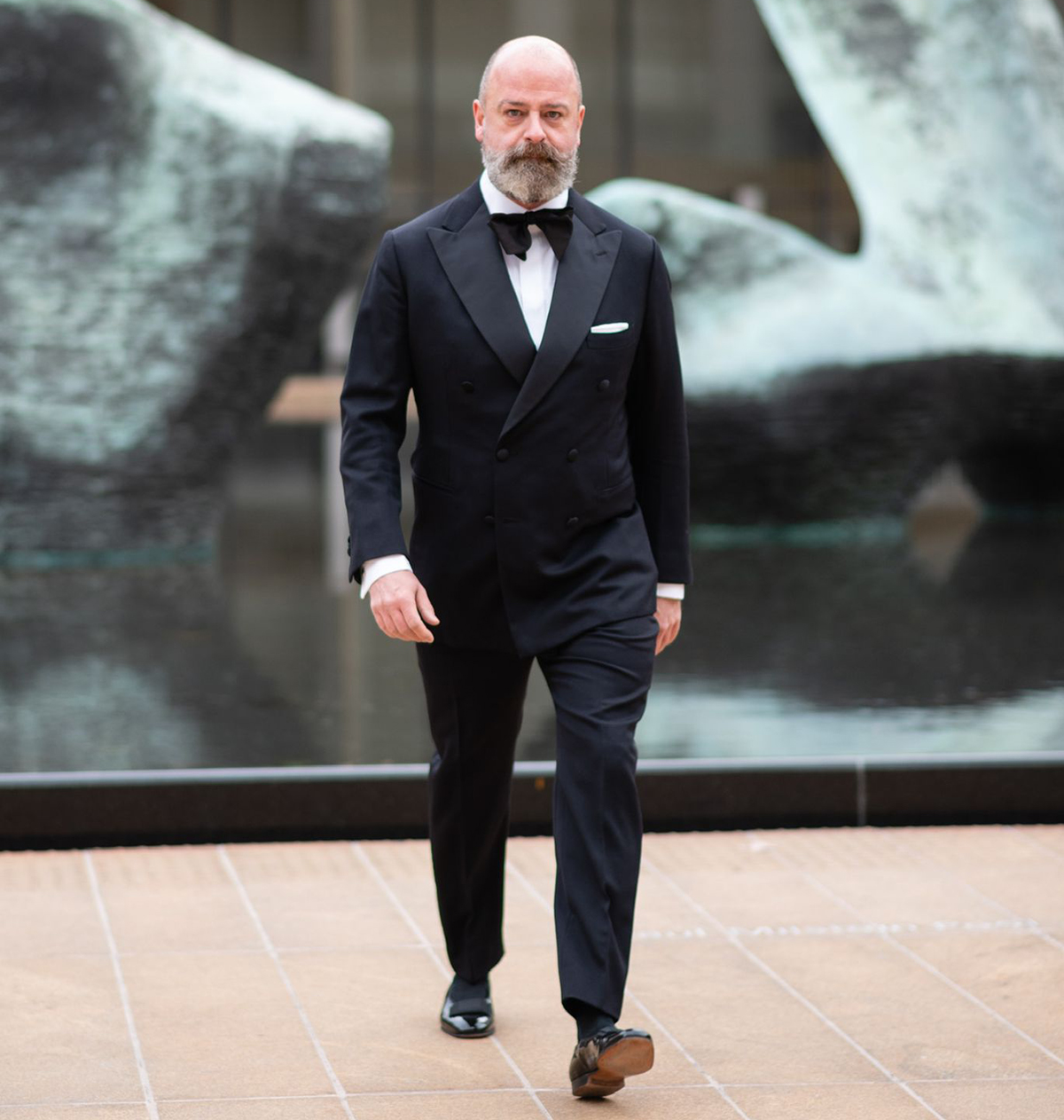 So let’s get to the few basic rules that govern traditional black-tie dress, beginning with the coat. The coat should be styled for simplicity. The most useful cloth for a year-round formal evening suit is a plain-woven wool in either black or midnight blue (the darkest blue). Either single or double-breasted, the evening coat has a ventless back and simple slit side pockets without flaps. Minimalism is the goal, no patterned cloth, a restrained silhouette, without flaps, yokes, throat latches, ticket pockets or other details found on suits and sports jackets. Occasionally a man may prefer turn-back cuffs on the sleeves, which is considered a bit dandyish, but acceptable.

Lapels, both single and double-breasted, are shaped in either shawl or peaked fashion, never notched. They are covered (“faced” in tailor’s terms) with either smooth or ribbed (grosgrain) silk which is traditionally the same color as the cloth they are covering, i.e., black or midnight blue.

That’s all there is to the basic dinner jacket. However, there are a few options worth mentioning for those who want to step beyond basic prescription. Velvet smoking jackets, more traditionally worn for at-home parties, are now considered acceptable for almost any formal occasion. Colors range from black and dark blue to bottle green, burgundy, brown, and almost any other color. Daniel Craig wore pink to the opening of his latest James Bond film. Winter dinner jackets can also be worn in patterned wool challis or tartan. These alternatives are viewed as slightly more casual than basic black or midnight blue, thought of as “country club” dinner jackets. 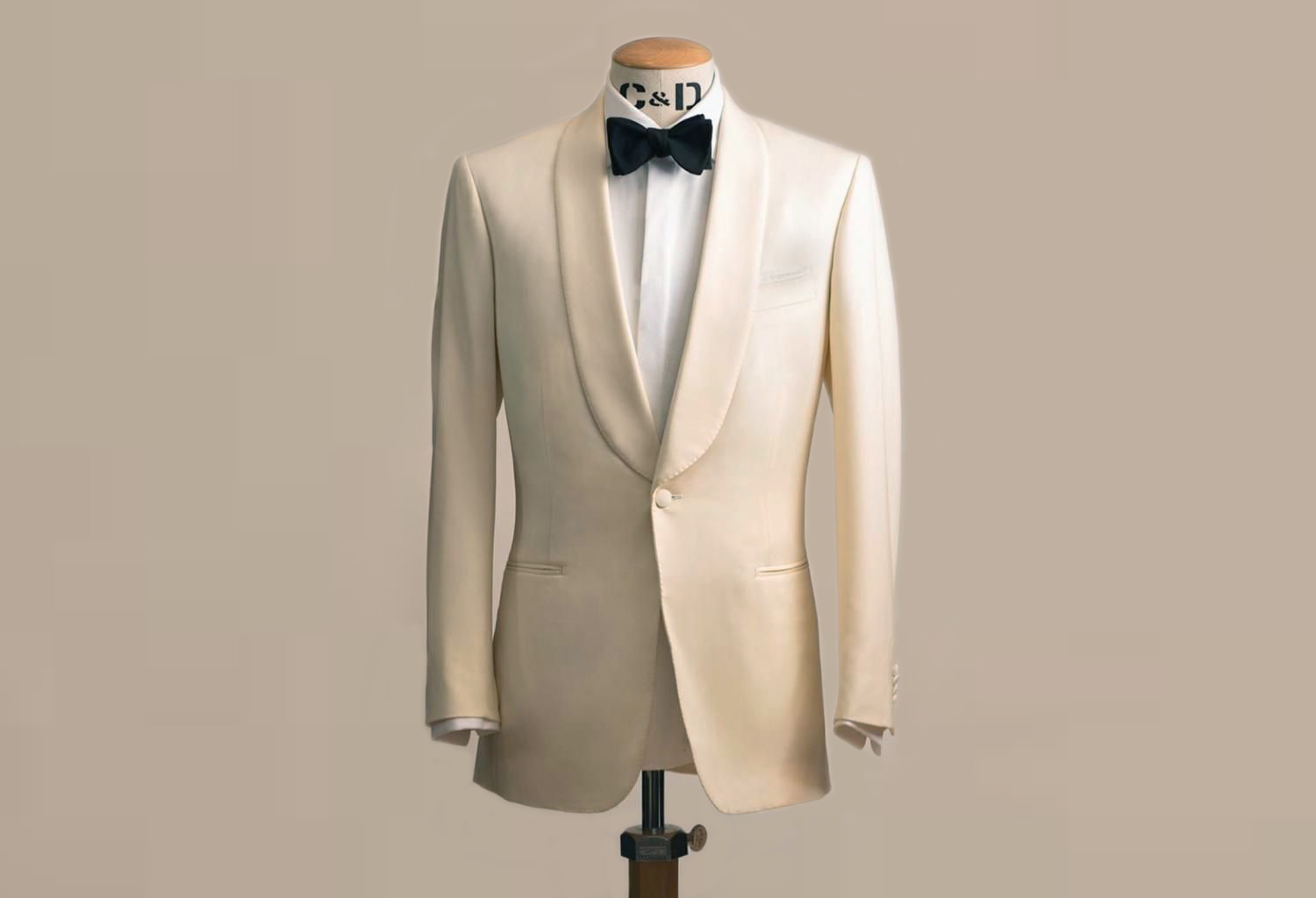 Warm weather alternatives can be lighter weight fabrics such as silk, linen, high-twist woollens and gabardines, and blended fabrics in brighter colors or pastels, but the most traditional and sophisticated color remains off-white or cream. A very Palm Beach look.

Formal dress trousers differ from day trousers in three basic ways. The most obvious is the stripe of silk (the same silk used for the coat facings) running down the leg outseam. Tradition calls for braces rather than belt, with pleats or plain front being a matter of preference. Evening trousers are never cuffed.

A variety of waistcoat (vest) designs can be found, but all are cut lower than a suit vest with only three or four buttons, are often backless for comfort and usually made in the same cloth as coat and trousers. Embroidered or striped silk, tartan, paisley, or other fancy waistcoats are considered bold, which is not to say wrong.

Waistcoats are another matter of preference, with cummerbunds (from the Hindi word kamarband, meaning a waist sash) sometimes worn instead, in the same fabric as the lapel facings. A quick tip: cummerbunds have pleats open at the top, used to store theatre tickets, loose change, cigar cutters, and other small items that a gentleman wouldn’t carry in his trouser pockets. In the 19th century these trousers were without pockets so as not to spoil the trim line of the leg.

Accessories begin with the formal dress shirt, in either lightweight cotton, linen, or silk, either with a plain or pleated bosom (the larger the man the wider the pleats) and either a wing collar (collar points go behind the bow tie) or simple turn-down. Formal shirts are usually pure white but cream is another popular preference. Three or four buttonholes are traditional, to accompany dress studs which match the cuff links for the turn-back (French) cuffs. The stud-and cuff links set is the only prescribed ornamentation apart from a white chest-pocket handkerchief and flower (boutonniere) for the lapel.

The bow tie is usually of the same fabric as the facings and follows the same rule as for shirt pleats: the larger the man, the larger the tie. Dandies might opt for polka dots, pastels, or even sequins perhaps, but those choices go far beyond the bounds of tradition.

And lastly a word about shoes. Evening footwear is characterized by being lightweight, black, and usually low-cut. Socks are plain black cotton lisle, silk, or lightweight merino wool. Dancing has always been associated with evening entertainment, so footwear should be comfortable: plain black leather or patent leather oxfords, or opera pumps, or velvet slippers with monograms.

All of this is not to say how the clothes should be worn. Many wear their formal kit as though they were Prussian generals on the reviewing stand. So stiff, as we used to say in my old neighborhood, they couldn’t swing if you hanged them. The trick to wearing any clothes is to wear them like you mean it, with simple, natural grace. Look at the old films of Fred Astaire, the man wore evening dress with effortless comfort, as though wearing pyjamas. That’s style, that’s the way to go.

Find out more about our bespoke Formalwear
Book a Formalwear Consultation

Written for Cad & The Dandy by G. Bruce Boyer, a renowned expert on menswear and men’s fashion. The former menswear editor for Town & Country, he has authored, coauthored and contributed to numerous books on style and his feature articles have appeared in Esquire, Forbes, The New York Times, The Rake and Sarto Magazine, among other national and international magazines. Mr. Boyer has also co-curated several fashion exhibitions at The Museum at the Fashion Institute of Technology in New York City. He lives in Bethlehem, Pennsylvania.