Following on from our Black Tie Dressing post, our focus now turns to the more formal White Tie. Beginning with an interesting aside, it’s worth noting that the classic “white tie” outfit – top hat, tailcoat and the rest of it – started out at the end of the 18th century as sportswear, in the form of riding kit. As ludicrous as it seems today, the top hat was worn by the riding gentry as a crash helmet, while the tailcoat derived from a full-skirted outer coat having its foreparts cut away for greater ease in the saddle. The remnant tails were buttoned up with two buttons in the rear, still seen on modern tailcoats at the small of the back. 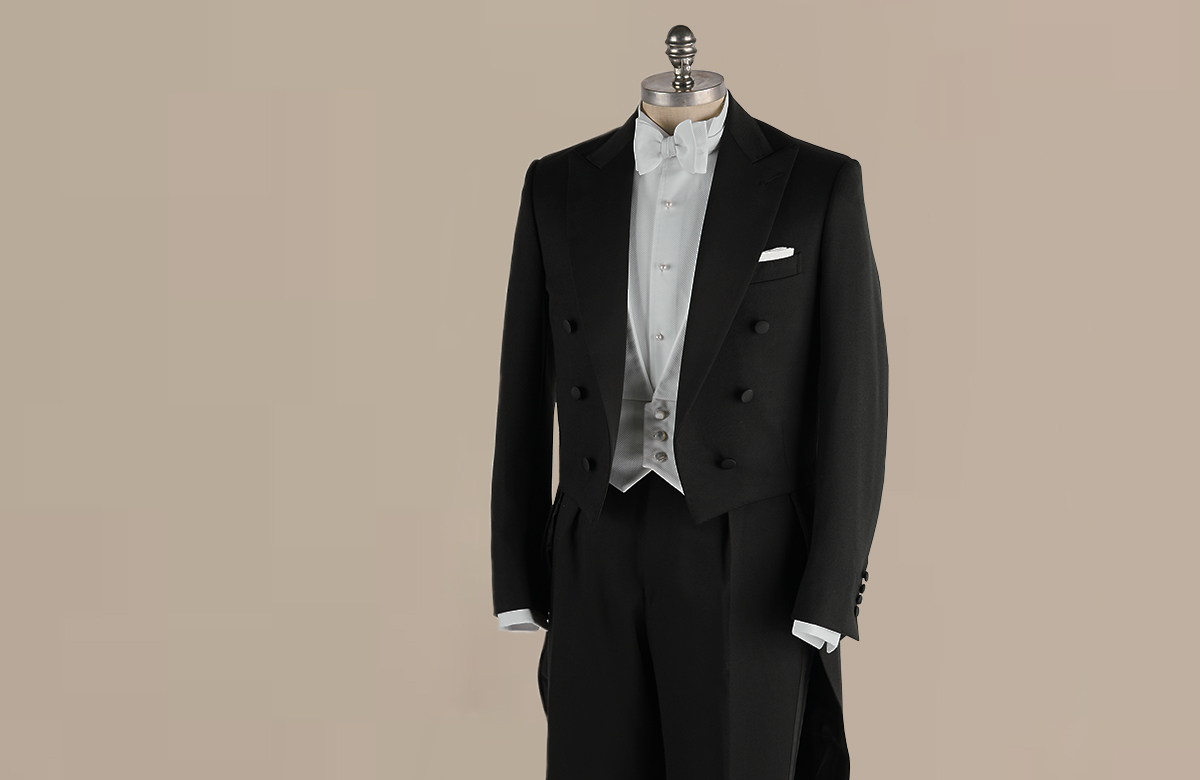 In the Regency period this country riding costume moved up the social scale and began to be worn in town, formalized by changing its russet colors to dark blue or black, and worn not with high-cut riding boots but with low-cut footwear more appropriate to club and ballroom. Today, the white tie ensemble remains the only early 19th century costume still in use apart from some uniforms.

But let’s get to what constitutes proper full evening dress today. When the invitation reads “White Tie” we are talking about the tailcoat and its accessories. The primary focus of the outfit is the coat, with a required cut so prescribed that it takes a very good tailor to make one. A tailcoat is made of black wool (although midnight blue is not inappropriate), usually either broadcloth, barathea or some other smooth unpatterned wool, with black silk facings, the front left unbuttoned (there are three dormant buttons placed far apart on either side of the front) and each side cut to curve slightly downwards to form points just below the waist. The tails themselves fall to the back of the knees. 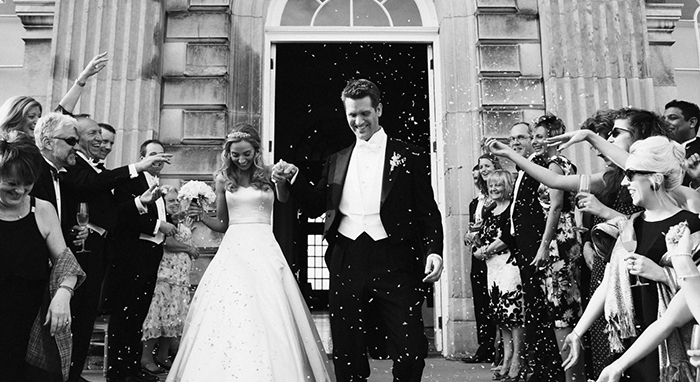 Underneath the coat a white pique waistcoat (vest) is worn. A full-dress waistcoat is traditionally cut low in a deep V with a three-button front closure and either square or blunt-ended narrow lapels. Many men are puzzled about whether the waistcoat sits lower or higher than the lower edge of the tailcoat. The answer is that the tailcoat’s edge rests below the waistcoat. If the waistcoat sticks out below the coat a man will be thought to have rented the outfit.

The only difference between white tie trousers and black-tie trousers (read black tie post here) is that the former traditionally has two stripes down the outseam, while the latter has only one. In every other respect, both trousers are the same in design: made to be worn with braces and the finished bottoms uncuffed.

The full-dress shirt differs from the black-tie version in that it’s always a wing-collared shirt with a bib front, and between one and three holes for studs and single cuffs for cuff links. The white pique bow tie – either butterfly or batwing shape – sits in front of the collar wings, not behind them.

Footwear can be the same as for black tie dressing, but usually low-cut pumps are worn with plain black silk hose. A black silk top hat is the correct formal dress head covering and in winter a black, navy, or dark grey unadorned single-breasted overcoat or opera cape is usually worn.

All in all, the white tie occasion should be sartorially carefree. As long as the tailor does his work properly and follows tradition, we can all confidently get dressed without meddlesome choices. The whole ensemble may seem a bit intimidating but it’s really as pain-free as can be. Full dress formal occasions should be momentous and memorable, and the best way for that to happen is to thoroughly enjoy them with the confidence of being well-dressed.

Find out more about our bespoke Formalwear
Book a Formalwear Consultation

Written for Cad & The Dandy by G. Bruce Boyer, a renowned expert on menswear and men’s fashion. The former menswear editor for Town & Country, he has authored, coauthored and contributed to numerous books on style and his feature articles have appeared in Esquire, Forbes, The New York Times, The Rake and Sarto Magazine, among other national and international magazines. Mr. Boyer has also co-curated several fashion exhibitions at The Museum at the Fashion Institute of Technology in New York City. He lives in Bethlehem, Pennsylvania.

MORE
Black Tie Dress: The Experts’ Guide
Don’t Cut the Cord: The Case for Corduroy
A Return to the Office, Part II: Back in Business Casual